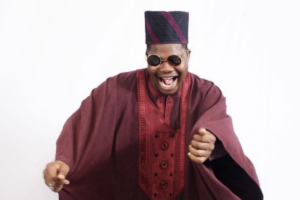 Nigerian skit maker, Debo Adebayo, better known as Mr Macaroni disclosed that before taking a detour to become a comedian, he had aspired to be a “popular and serious” actor.

Mr. Macaroni made this disclosure after he appeared as a guest on Cool FM, for an interview.

Here’s an excerpt of his interview captured by ghbase.com;

“How and why did you go from studying theatre arts to becoming a skit maker?”

Mr. Macaroni: Depression and frustration led me to content creation. As a matter of fact, I swore I would never do content creation. I was looking at it at the time and looking at everyone doing it like “wetin be all this? wetin these ones dey do?” As a thespian, there’s a lot of things they teach you. As a theatre arts person, you just feel like some things, what is all this one?

You want to do stage, big performances, cinema projects. You know, work that defines you as a thespian. So then I was just looking at Broda Shaggi, Lasisi, Twyce, Maraji, and saying “what are all these ones doing? Mschewww”.

So then I started going for auditions back to back, casting calls, what have you, and these people were actually making me doubt my own talent. Because in theatre school, from the moment I got into school, I think from 200 level, every best actor award na me dey collect am. So coming outside of school now, going for audition, I go go for audition, they go come dey look me as if wetin this one dey do? I said ah ah, shey they deceive me for school?

Abi wetin dey happen for here. So you know it was so frustrating. So after a while, I looked at these guys (the skit makers), I now looked at them again. I now said “e be like say wetin dem dey do no too bad like that.” So I just started.

At the time I didn’t even know what I was doing, I was just frustrated. And that’s how it started. That was late 2019 I started creating those videos. It was when I started using that agbada that everything changed.