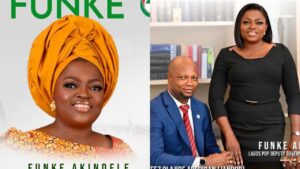 Popular Nollywood actress Funke Akindele, who is running for deputy governor of Lagos on the People’s Democratic Party (PDP) ticket, is confident of success in the title race.

Funke Akindele brazenly asserted during an interview with Channels TV on Thursday that she has what it takes to help her political party win.

Revealing how she will win the election, the mother of two was positive her over 15 million fans on social media give her an edge over her contenders, and in addition to having a large online following, Funke mentioned that she also has grassroots supporters.