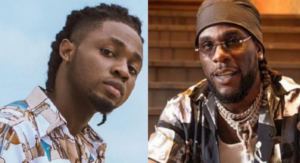 Nigerian superstar, Stanley Omah Didia, also known as Omah Lay has revealed who the best artiste is in Nigeria, stating nobody comes close.

The crooner in an interview revealed who he thinks is on top of the game when it comes to music in Nigeria.

Omah Lay affirmed that Burna Boy is the biggest right now and said that he is learning from him.

He claimed that Burna Boy’s songs are what rules Port Harcourt where he comes from.

When asked to mention any other artiste he sees at the top with Burna Boy, he boldly stated that he sees no other person.

See the video below:-

“I Don’t See Anyone In The Music Industry Better Than Burna Boy” – Omah Lay #BBNaijaS7 pic.twitter.com/e84ZTgq9l1