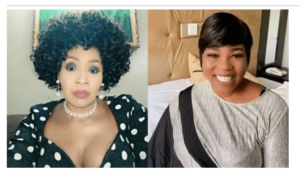 Kemi, a few hours after Nollywood actress Ada Ameh passed on, took to her page to revisit her old beef with Late Ada Ameh; recounting how she called her mad and mentally derailed.

She was lambasted by social media users but it appears that Kemi is willed to continue her beef with the late Ada Ameh.

In a new ignited beef, Kemi Olunloyo has written a lengthy post recounting her first encounter with the actress and how she bullied her. According to Kemi, a lot of people are silent about the bully side of Ada Ameh because she is dead.

According to her, she never knew Ada has been in the movie industry until their clash about the Oromoni incident.

“… The string of “let’s beat Kemi Olunloyo” started with the Oromoni case. She and Adetoun terrorized me!
Even Tonto fans are wondering why I said a deputy governor candidate should not have been advocating violence.
These three women committed atrocities. It costs N200K to file criminal charges at Panti. I didn’t have NCOOK to get justice so I let it go. If they or their crazy fans had beaten me and injured me, everyone will go silent,” she wrote in part. 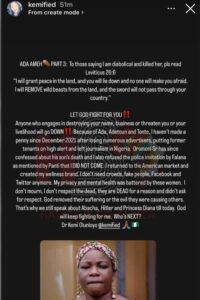