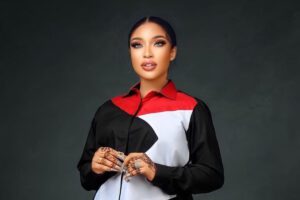 Tonto Dikeh has been bearing the name “King Tonto” for a couple of years now. A lot of people had the perception that it was a title she added to her name but she has cleared the air on her name.

In an interview with Channels Television about the Rivers State Governorship race, the actress cleared the misconception about the use of her name ‘King’ and what she thinks of her role as the Deputy Governor.

“Now, what I say might be a little bit controversial, but nevertheless this is the truth. A deputy is a spare tire every governor, every mandate has ever heard?

“I don’t call myself ‘king’. My name is King Tonto, it is a name, not a title. It’s a name gotten from my son? That’s something I’ve never really gotten to explain to a lot of people but I think now I have to because I had to take it out from my campaign. “

“Name and campaign initiative because I did not want traditional rulers to think me ahead of them. My ‘King’ comes as a name gotten from my son. It’s not a title in any way or form”