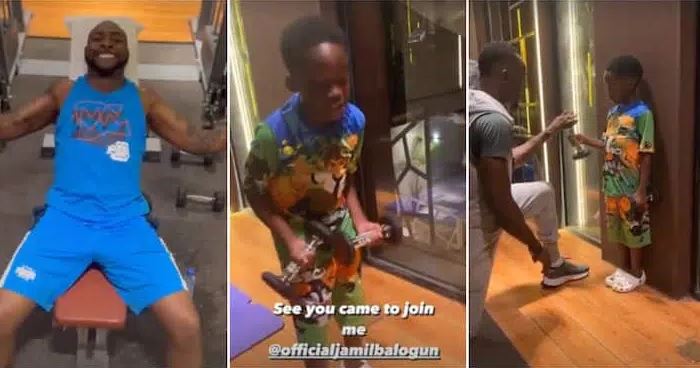 Super star singer, Davido has responded to Jamil Balogun, the son of singer Tiwa Savage, after he was teased about his weight.

In a video uploaded on Instagram on Sunday, Davido is seen working out alongside Jamil and others.

During the gym session, Tiwa Savage’s son said he did not know Davido had so much weight.

“I didn’t know you had this so much weight uncle David. My daddy could do this so fast,” the boy could be heard saying.

Replying to Jamal, Davido said he was stronger than the Tiwa’s ex-husband Teebillz.

“I am stronger than your daddy,” Davido replied.

In December 2021, Tiwa and her son went on vacation with Davido’s daughter Imade and her mum.

The two six year olds are often in play groups and hangouts causing Davido to make a joke about the duo being a couple.