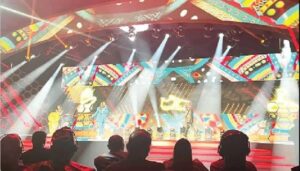 David Adeleke, the popular Nigerian singer famously known as Davido, and his colleague, Tiwa Savage, met each other recently in Morocco.

The Nigerian singers were among the entertainers who entertained guests at the 2022 Confederation of African Football awards held on Thursday night, July 21, 2022, in Rabat, Morocco.

Savage performed her hit songs, ‘Koroba’ and ‘All Over’. This comes a week after she bagged an honourary doctorate from Kent University, United Kingdom.

Aside from his performance, Davido teamed up with a popular Togolese footballer, Emmanuel Adebayor, to present the award for the ‘Young Female Footballer of the Year’ to Ghana’s Evelyn Badu.

Davido and Tiwa also had fun moments backstage, as they cracked jokes and laughed together.

Other artistes who performed at the event include Morocco’s Asmaa Lamnawar and a Cote d’Ivoire music group, Magic System.

Nigeria’s Asisat Oshoala won the ‘Women’s African Player of the Year’ category, making it her fifth time of going home with the prestigious award.

Senegal’s Sadio Mane was named the ‘Men’s African Player of the Year’.

Dignitaries at the event include football legend, Austin ‘JJ’ Okocha.