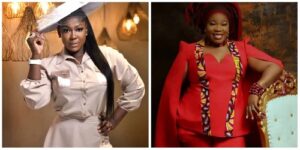 Nollywood actress, Susan Peters has described late actress, Ada Ameh as a loving person while paying tribute to her.

Recall that Ameh died on Sunday after slumping during an outing.

In an Instagram post, Peters said Ameh called her on phone after realizing that they come from the same state.

Since then, they have become inseparable.

She wrote: “Oinem opochu, ku ce wa, @adameh always blunt , she tells it as it is. In this industry of ours she picked her phone and called me and said Susan this is Ada Ameh. I was screaming, imagine her a senior colleague calling her junior to say I heard you are from Benue and Idoma and ever since we clicked.

“This is a dream I would like to wake up from , at this party she said Susan let’s damage the food and we laughed.

“Ah Iku a wosi nooooo you were always a delight ,life no balance at all. Let’s all be deliberate and intentional in loving one another please.”