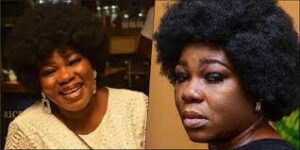 Nigerians and movie lovers have expressed shock and are grossly devastated over the death of popular Nollywood, actress Ada Ameh.

Ada Ameh reportedly passed away on Sunday night. You recall that Ada Ameh spoke out about her struggles with mental health in June 2022.

The Johnson star claimed that although she was given a job, she was unable to complete it due to mental health concerns

Ada Ameh lost her only child, Aladi Gift in October 2020, following an illness. It was reported that she died after undergoing surgery.

“Everything is going to be fine. I have an issue right now, and it’s taking my life. I will not die. We will get over it,” Ameh had said in a video on her Instagram page.

She said, “I was given a job, but I didn’t do the job because I had mental issues. Will people understand when you say you have mental issues? They won’t. They’re slamming me with a bill, suing me. It’s okay.”

In her final interview, which aired on TVC’s Your View on July 1, 2022, the actress admitted that while she had been severely depressed prior to the death of her daughter, the condition only got worse afterward.

Ada Ameh revealed that added that, before losing her daughter, she had lost seven other family members.

“I had lost three sisters before that time, and each had three children. I’ve lost three of my brothers and my father. So after mourning all these people, and then (I lost) my daughter,” the actress said.

She said, “When my daughter died, my world crumbled before me, and sometimes, I see myself crying for days.”