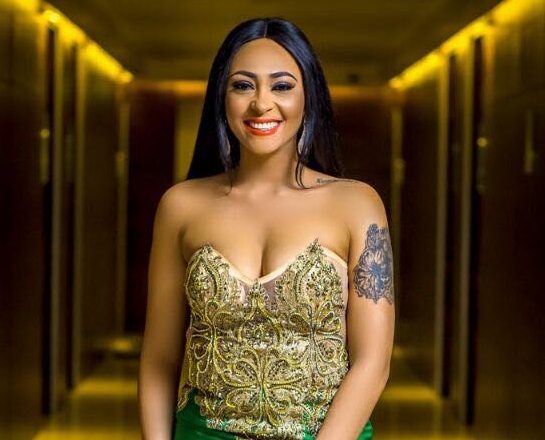 Actress Rosaline
While speaking in an exclusive interview with PUNCH Newspaper, Gambia-born Nollywood actress, Rosaline Meurer, who last year was widely accused of being the real reason why actress Tonto Dikeh and her husband, Olakunle Churchill broke up which later resulted in divorce.
On being trailed with criticisms for allegedly being responsible for the divorce of Tonto Dikeh and Olakunle Churchill, she said; "The stones that were thrown at me with intentions to bring me down last year when I was used to cover up a marriage crisis turned around to be in my favour with God on my side. I got more jobs and more money.
"At first, I was bothered; then I realised that so many other innocent people were used and lied on as well in the same situation. Out of respect for the head of the family and because I and my family have come a long way with him even before I relocated to Nigeria, I decided to let go. I don’t have any relationship with Tonto Dikeh; I only know her to be Mr. Churchill’s ex-wife."
On the scandal that trailed her, she said; "I feel like everyone is entitled to their opinion. No matter how good you are, people will always talk. Though sometimes, I take note of some of the talks to correct any negative impressions people have."
On her relationship, she said; "I like to keep my relationship status private. However, I love men who have integrity, are hard-working and have the fear of God. I love someone who is honest, loves hard, tells the worst truth instead of his best lie, loves and respects his parents, loves to cuddle and travel."
On her role models, she said; "My major influencer is Mr. Olakunle Churchill, the Chairman of Big Church Group. He has been instrumental to how far I have come in my career. My mother is also my role model because I celebrate her personality and I admire her strength and courage as a woman.
"Contrary to what was reported, I was never a personal assistant to anyone or organisation. I was only unveiled as an ambassador of Big Church Foundation’s Mother and Child Project."
--Advertisements--