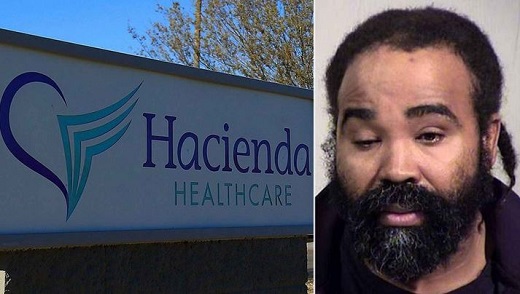 Nathan Sutherland, 36, was arrested for the sexual assault of an incapacitated woman at a long term care facility in Arizona. (AP/Maricopa County Jail)
A male nurse has been arrested on suspicion of rape after a woman who has been in coma for 14 years gave birth last month in Phoenix, Arizona.

Phoenix Police announced that Nathan Sutherland, 36, who was responsible for taking care of the unconscious patient at the Hacienda HealthCare centre in Phoenix, Arizona, was arrested after his DNA "matched the baby".

The 29-year-old woman went into a coma after nearly drowning over a decade ago.

Sutherland, a licensed practicing nurse, who has been working at the facility since 2011, has been booked into Marciopa Jail on one charge of sexual assault and one charge of abusing a vulnerable adult, Mirror reports.

Sutherland used to be a gospel rapper, it has been revealed. He belonged to a two-person rap group called ‘SLEEPLESSLOULJAZ’. He went by the stage name ‘Nate’.

The biography for the musical group says Sutherland and his musical partner ‘T’ were ‘adopted by 2 US citizens from a Haitian Orphanage in 1989 at the ages of 7(Nate) and 4(T).

The rap group have performed at the Faith Center West Family Church and at small concert venues and once performed at a father’s day luncheon at a Hilton Garden Inn Hotel in Phoenix, Arizona in 2010.

Phoenix Police Chief Jeri Williams said at a news conference that Sutherland was arrested and will be charged with one count of sexual assault and one count of vulnerable adult abuse for the incident at the Hacienda Healthcare facility in Phoenix.

"We have worked virtually nonstop every day, every night to resolve this case," Williams told reporters, adding that the crime was "beyond reproach."

Sutherland invoked his Fifth Amendment rights after his arrest and did not give an interview to authorities regarding the case, according to police.