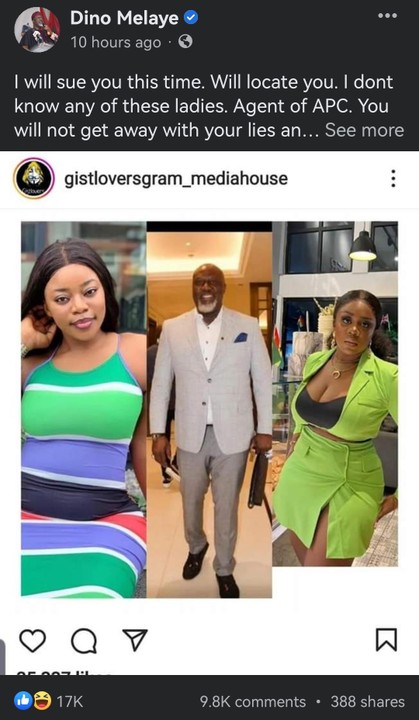 After being threatened by spokesperson for the Peoples Democratic Party (PDP) Presidential Campaign Council Dino Melaye, Gistlover has given a sarcastic apology to him.
Recall that Melaye was angry after the blogger alleged that he was romantically involved with two popular skit makers, Ashmusy and Nons Miraj.
The former senator threatened the blogger while accusing the blogger of being an APC agent.
He also promised to secure justice over ”lies and unfounded story” about him.
He issued a 24-hour ultimatum for the blogger to come through with an apology or face legal action.A few hours after, the blogger apologised but sarcastically laden with curses.
Captioning a photo collage of Melaye, the blogger wrote: “Dear Dino Baby, this is me publicly apologizing say he no go better for you if you no sue me, say Okan eh oni bale (your mind will never be at rest) if you no send the letter, say ogun Loma pa eh (the god of war will kill you) for looting the money that belongs to the masses and using it to sponsor all these hungry rubber yansh girls.
“DINO BOSITA ARA LOMA PA EH (Dino, come out, thunder will destroy you). I HOPE MY APOLOGY IS ACCEPTED DINO BABY.
“Okan eh oni bale (your mind will never be at rest) Dino Baby, meanwhile this is my lawyer, forward your lawsuit to him. We meet in court Dear looter.”