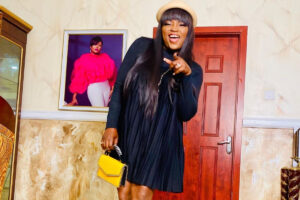 Popular Nollywood actress, Funke Akindele Bello, has shown many people how resilient she is despite the crisis that is upsetting her marriage.

About two weeks ago, Funke Akindele’s husband, Abdulrasheed Bello aka JJC Skillz announced that their marriage had fallen apart following irreconcilable differences, and that sparked a huge controversy on social media.

Many people were discussing the news as they attempted to explain what would have precipitated their abrupt breakup or who might have been at fault.

The mother of twin boys posted a nice video on social media in which she can be seen having a good time while dancing to a gospel tune and spreading some Sunday cheers to her fans.

The mother of twins encouraged everyone should always have something to smile about.

She wrote: Happy Sunday!!!
May we continue to have reasons to smile. Amen!!!