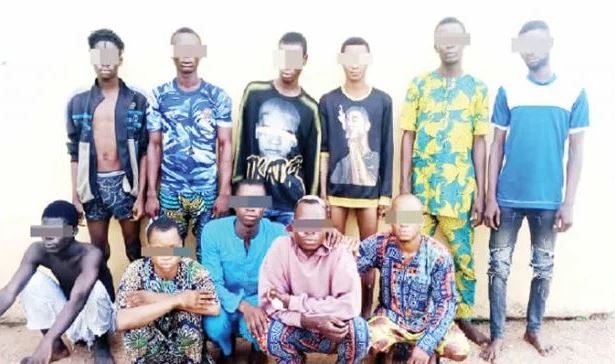 As many as 11 suspected members of the Eiye Confraternity, including four siblings, have been arrested over the killing of one Olaosebikan Tejuosho at the Isale-Abetu area of Abeokuta, Ogun State, The PUNCH reports.

The state Police Public Relations Officer, SP Abimbola Oyeyemi, in a statement on Sunday, said the suspects were arrested at the Itoku area of Abeokuta.

Oyeyemi added that they were arrested following credible intelligence received by the anti-cultism section of the command.

According to him, the cultists, who were involved in a series of bloody clashes in the metropolis, were planning another onslaught at the Itoku area before their arrest.

He said, “Upon the information, the Officer-in-Charge of the anti-cultism unit, CSP Shobiyi Oluwatoshin, mobilised his men and moved to the area, where 11 members of the group were apprehended.

“On interrogation, the suspects confessed to being members of the dreaded Eiye cult. They also confessed to their involvement in a series of cult clashes, one of which led to the killing of one Olaosebikan Tejuosho at Isale Abetu area of Abeokuta on March 25, 2022.

“They also confessed to being responsible for the killing of one Habib Mego and one other person simply known as Schoolboy (real name unknown) at the Omida area of Abeokuta, all on the same day.”

The PPRO said the state Commissioner of Police, Lanre Bankole, had ordered investigation into the past activities of the suspects.

Meanwhile, the Ogun State Governor, Dapo Abiodun, has blamed parents for the rise in cultism in the state.

The governor, in a statement issued by his Chief Press Secretary, Kunle Somorin, on Sunday, noted that the children contributing to the rise in cultism and insecurity were not spirits, but came from some families in the state.

The governor urged parents to play their roles by being responsible for their children.