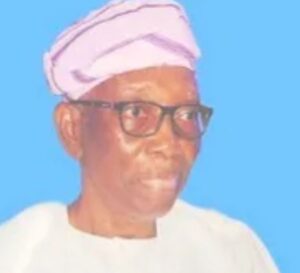 Oyekunle Oluwasanmi, a former minister of state for power and steel has passed on, his family confirmed on Thursday.

Oluwasanmi died on July 14 at the age of 85. He was appointed the chairman of the board of the News Agency of Nigeria (NAN) in 1992.

Oluwasanmi was also a board member of several companies including Kinley Securities Limited and Wise Health Services Limited.

Oluwasanmi was appointed minister of state for power and steel in 1997 during the Sani Abacha regime. His family said that under his watch as minister “several reforms which positively impacted the nation’s power and steel sector were introduced.”

“A community leader worthy of emulation, the late Chief Oyekunle Oluwasanmi was the Customs & Excise Area Administrator for Tin Can Island Ports and subsequently at Calabar Ports.

Oluwasanmi retired in January 1987, and co-founded the law firm of Ibironke, Oluwasanmi and Co. along with his friend, late Adejuyigbe Ibironke.

His brother, the late Professor Hezekiah Oluwasanmi, was a former vice-chancellor of the University of Ife (now Obafemi Awolowo University), Ile-Ife, Osun State, from 1966 to 1975.

He is survived by his wife, Grace Oluwasanmi nee Ayeni, children and grandchildren.