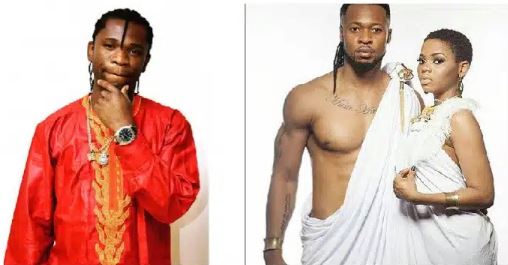 Controversial rapper, Darlington Okoye aka Speed Darlington has claimed that singer Flavour N’abania and Chidinma Ekile have slept together.
He made the claim on a video he shared on his Tiktok page.
According to him, the body language of Flavour and Chidinma shows that they must have been intimate.
Darlington insisted that he is not a child that could be deceived.
He went on to disclose that he hasn’t slept with any celebrity and he’s really longing for it.
In a translated version, he said: “I have not slept with any celebrity in my life. Flavour has slept with Chidinma, yes, you can’t hold someone’s woman that way if you and her haven’t done something, f**k outta here, I’m not a child yes, you can’t hold someone’s woman like that if it’s a platonic relationship.
“So no nigga, I don’t give a f**k. Let me sleep with celebrities also, I have not slept with a celebrity, do you understand?”