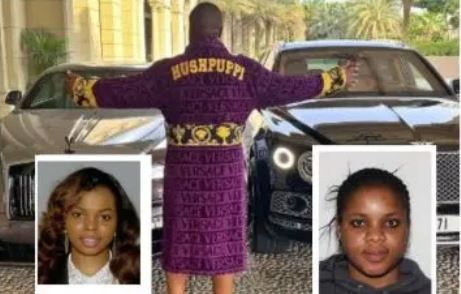 Two accomplices of Internet fraudster, Hushpuppi have been arrested by the Federal Bureau of Investigation (FBI).

Motunrayo Fashola and Bolatito Agbabiaka have been arrested but were granted bail.

The other outstanding warrants that have not been affected are those of Kyari and Vincent Chibuzo. FBI agents visited Nigeria last week to meet with senior police officers in order to effect the warrant of arrest on Kyari.

Hushpuppi and five gang members were arrested for allegedly being involved in fraud and laundering money meant to finance a school for children in Qatar.

Otis Wright of the United States District Court for the Central District of California ordered the Federal Bureau of Investigation to track down Kyari and produce him in the United States for his role in a multi-million dollar fraud perpetrated by Ramon Abbas, aka Hushpuppi.

The affidavit accused Kyari of conspiring and arranging for Vincent to be arrested and jailed at Abbas’ behest, and then sent Abbas photographs of Vincent after his arrest.

Kyari had denied any wrongdoing in a statement on Facebook, the senior police officer narrated that Abbas called him two years ago to complain about a person threatening to kill his family.