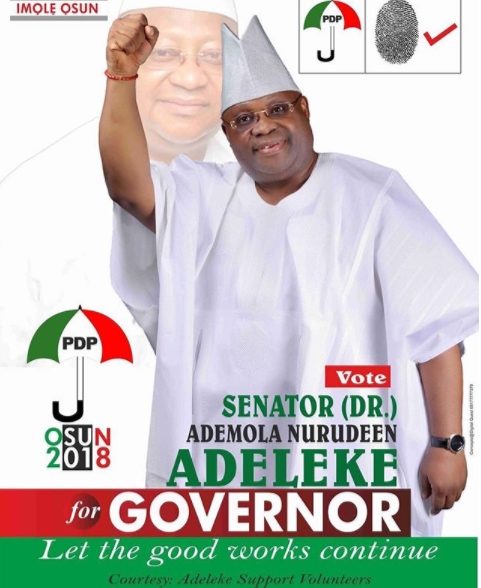 While speaking at the Secretariat of the People’s Democratic Party (PDP) in Osogbo, capital of Osun State on Wednesday, Senator Nurudeen Ademola Adeleke, disclosed that his entire household prayed and fasted for 40 days before seeking the face of God on gubernatorial aspiration.
According to DailyTrust, the Senator representing Osun West Senatorial District, made the revelation when he submitted his letter of intent to contest for governorship to the state Chairman of PDP, Honourable Soji Adagunodo.
Addressing a huge crowd of his supporters who thronged the PDP Secretariat, Adeleke urged the people of Osun to vote for him and promised to sustain the legacy of his late brother, Senator Isiaka Adetunji Adeleke.
"We held a family meeting to seek God’s guidance on the governorship issue and we said let all of us pray and fast for 40 days for a divine direction from Him and it was when we got a clear signal that I came out to announce that I will contest the Osun Governorship election."
"During this period of the 40 days of prayers and fasting, we the Adeleke’s made covenant with God that we shall alleviate the suffering of the people of Osun and liberate them from the shackles of Mr Rauf Rauf Aregbesola and the All Progressive Congress".
In a chat with a correspondent on the sideline of the event, Senator Adeleke said he has fulfilled his campaign promises to his constituents. He said he will give priority to agriculture if elected as next Governor of Osun.
Senator Adeleke is an uncle to Nigerian hip-hop singer, David Adeleke popularly called Davido by fans.
--Advertisements--