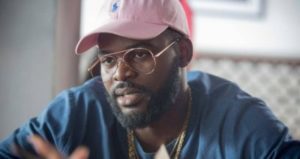 The multi-talented entertainer made this announcement on Instagram, via a post in which he revealed that the deal would cause him to play the lead role in an original drama series titled, “Church”.

According to him, he would be playing the character of William Randolph Church, “a charismatic and intense Nigerian billionaire” in the forthcoming drama series which would serve as an addition to his already solid portfolio as a thespian, while also complimenting his growing reputation as a seasoned comedian and a rapper of substance.

Falz seems to have timed the announcement for now while the arrangement was going on even though he randomly hinted at a coming major announcement, by sharing cryptic posts on his Instagram page.

When he was finally prepared to let the cat out of the bag, he did it on Instagram, in grand style.