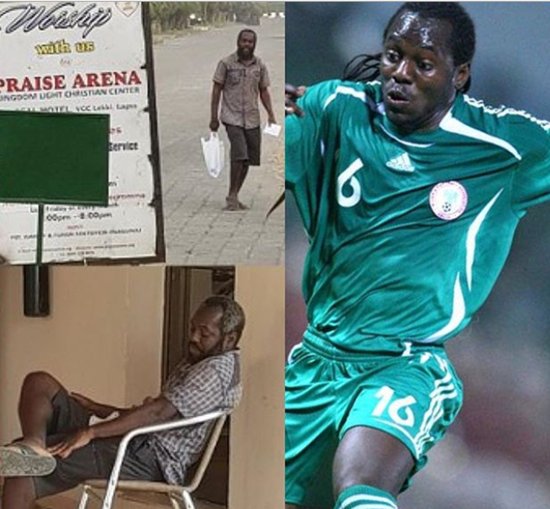 Wilson Oruma’s before and after ptuneos
AMonpointTV News reported on Thursday that former Super Eagles midfielder, Wilson Oruma, suffered a relapse of the emotional disorder that bugged him 6-years ago after he was defrauded by a Pastor and some fake oil businessmen.
Oruma who captained the Golden Eaglets’ 1993 FIFA U-17 World Cup winning team, was lured into a fake oil business in December 2012 in which he invested a whopping sum of N1.2billion without proper consultation after retiring from football, and he consequently lost the investment.

Oruma (right) with his brother some hours ago in Warri, Delta state
The ex-player’s friend, Emakpor Dibofun who had made the shocking revelation said: “Wilson (Oruma) hasn’t really recovered from the emotional disorder which he suffered after he was duped.
“He has been to several places in search of a lasting solution, but it gets worse after a bit of improvement.”
Meanwhile, new ptuneos of Oruma has just emerged on social media after his brother, Oruma Akpevwe Daniel, took to his Facebook page and shared the images while he captioned it "M.O.N on the wings of Grace . No shaking."
--Advertisements--