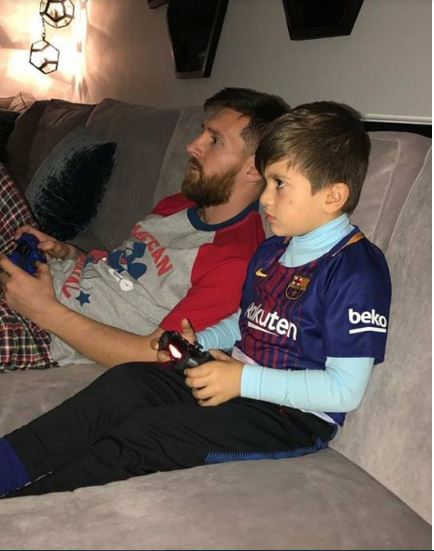 Messi and his son
Lionel Messi is not immune from being criticised – even by son Thiago.
The five-time Ballon d’Or winner is widely regarded as one of the finest footballers to have ever played the sport.
But the Barcelona captain, La Liga’s record goalscorer, confirmed in an interview that Thiago is not always impressed.
"[He] understands football more because he’s the biggest [of Messi’s children] and he talks about everything to do with football," Messi told World Soccer.
"I have already had some criticism from him! Barcelona, La Liga, the Champions League… he follows it all. He likes it, he asks questions and he gives me pointers when things don’t go so well."
Messi added he previously did not like to talk about games he had lost, but Thiago’s interest encourages him to analyse disappointing results.
"It’s not like that anymore!" Messi added. "It’s always tough to manage the losses and the bad performances.
"But Thiago forces me to talk about what happened and explain why we didn’t win. Now, we talk much more."
Messi and Barca are in Copa del Rey action on Thursday, the holders seeking to overturn a 2-0 deficit when they welcome Sevilla to Camp Nou in the second leg of the quarter-finals.