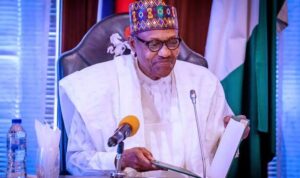 President Muhammadu Buhari seems to be begging the members of the Academic Staff Union of Universities (ASUU) to return to their posts.

It could be recalled that these members have been on a five-month strike and according to the president, things are not ‘funny’ anymore stating that “enough is enough”.

The president made this known in a recent submission on Monday, July 11 as he hosted APC governors at his house in Daura, Katsina state.

In his submission, he said;

“We hope that ASUU will sympathize with the people on the prolonged strike. Truly, enough is enough for keeping students at home. Don’t hurt the next generation for goodness sake.

Colonial-type education was geared towards producing workers in government. Those jobs are no longer there. Our young people should get the education to prepare them for self-employment. Now education is for the sake of education.

Through technology, we are much more efficient. We should encourage our children to get an education, not only to look for government jobs.

By this time next year, I would have made the most out of the two terms, and in the remaining months I will do my best.”