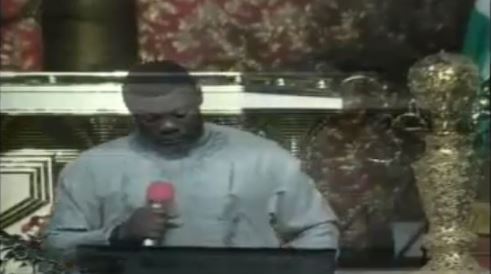 Isa Elbuba
PoliticsNGR has revealed that a Pentecostal pastor, Isa Elbuba was almost arrested by the Department of State Security (DSS) for criticizing the activities of Fulani herdsmen.
According to a witness, Prince Henry Nwazuruahu Shield, Elbuba was almost picked up by the operatives in Jos, Plateau State earlier yesterday.
It will be recalled that the man of God criticized the herdsmen and President Buhari in a church sermon Video which has since gone viral. Elbuba is the General Overseer of EBOMI Ministries.
His church members reportedly resisted his arrest thereby prompting the DSS to invite him for interrogation.
Mr Shield wrote;
"You remember him? He’s the bold pastor who made the same kind of Video I made few days ago. He has just been arrested. I’m ready for mine. We won’t let these tyrants destroy the democracy many laid down their lives to build. 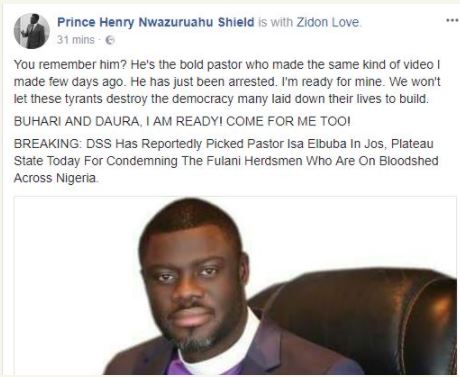 BUHARI AND DAURA, I AM READY! COME FOR ME TOO!
BREAKING: DSS Has Reportedly Picked Pastor Isa Elbuba In Jos, Plateau State Today For Condemning The Fulani Herdsmen Who Are On Bloodshed Across Nigeria.
UPDATE: According to Mr Shield, the church members resisted the DSS officers. They asked the pastor Elbuba to report to the DSS office tomorrow."
--Advertisements--