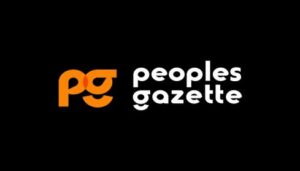 The Peoples Gazette newspaper’s head office in Abuja, has been invaded by the Nigeria police, according to SaharaReporters.

The police stormed the newspaper’s office and arrested one of its editors, John Adenekan.

Adenekan was arrested at about 12:35 pm on Friday by five armed police officers who broke into the newspaper’s office at Plot 1095, Umar Shuaibu Avenue, Utako.

The security operatives were said to have demanded to see the Managing Editor, Samuel Ogundipe and a reporter Adefemola Akintade who wrote a report on former Chief of Army Staff, Lt Gen Tukur Buratai (retd.).

“The police just raided our office now and arrested one of our editors, John Adenekan,” a staff member of the organisation told SaharaReporters.

“They demanded to see Samuel Ogundipe and Femola, a reporter. Adenekan has been taken to Utako police station. It seems it is about Buratai’s story.”

The action of the police came days after an Abuja-based Publisher and a proxy of a Buratai, Isah Bello sued Peoples Gazette for allegedly defaming the Ambassador to Benin Republic.

The newspaper on June 23 reported that the Independent Corrupt Practices and Other Related Offences Commission (ICPC) raided and recovered items including 50 luxury watches from a purported residence of Buratai.

But Bello, in the suit before a Federal Capital Territory (FCT) High Court, Abuja, claimed the newspaper failed to respond to a letter dated June 28, 2022 seeking to clarify the source of its story.

According to him, the failure to respond to the inquiry was a violation of section 4(a) of the Freedom of Information Act 2011 and therefore is wrongful and illegal.

Filed by Osuagwu Ugochukwu, the publisher asked the court to prevail on the defendant to supply the information requested in his letter.

“The plaintiff claims against the defendant as follows: A declaration that the refusal, failure and or neglect by the defendant to release the information requested by the plaintiff in his letter, dated June 28, 2022, amounts to violation of Section 4 (a) of the Freedom of Information Act 2011, and therefore is wrongful and illegal,” part of the court documents published in some national dailies had read.

“An order directing the defendant, including her servants, agents, privies, officials and or cohorts to furnish the plaintiff’s with detailed information as stated in plaintiff’s letter, dated June 28 2022, until judgment is delivered in this case within 14 days of the delivery of judgment.”

The affidavit in support says partly: “I, Isah Bello, male, Muslim, publisher and Nigerian citizen of No 6A Muhammadu Buhari Way, Abuja, hereby makes an oath and states as follows: “That I am the deponent herein.

“That I am a publisher and have personal knowledge of the facts deposed herein. That I know as a fact as follows: “That the Federal Government of Nigeria has enacted the Freedom of Information Act, 2011.

“That in the pursuit of her rights and pursuant to the right of access to information guaranteed by the Freedom of Information Act 2011, the plaintiff, by letter dated June 28, 2022.” asked the defendant to furnish him with certain information in her custody relating to its June 23, 2022 online publication entitled ‘ICPC RECOVERS MULTI BILLION-NAIRA

“CASH, ROLEX WATCHES STOCKPILED IN EX-ARMY CHIEF BURATAI’S ABUJA RESIDENCE’ now produced and marked Exhibit A, a copy which was sent to the defendant and proof of receipt.

“That the June 28, 2022 letter of the plaintiff requested the following response from the defendant viz:

“Did you verify the allegations contained in your write-up with ICPC before publishing? This is because the ICPC press release of June 24, 2022 states to the contrary that Buratai owns the house in Wuse II, Abuja or has links with the K Salam Construction Company Nigeria Limited.

“Did you check with the Corporate Affairs Commission as to who the owners of the K Salam Construction Company Nigeria limited are? And perhaps whether Buratai’s name appears on the company’s directorship?

“You claimed you called Buratai during the ICPC raid on the Wuse 2 house. At what time and day did you call Ambassador Buratai? What number did you use in calling him? And which of the Buratai’s lines did you call?”