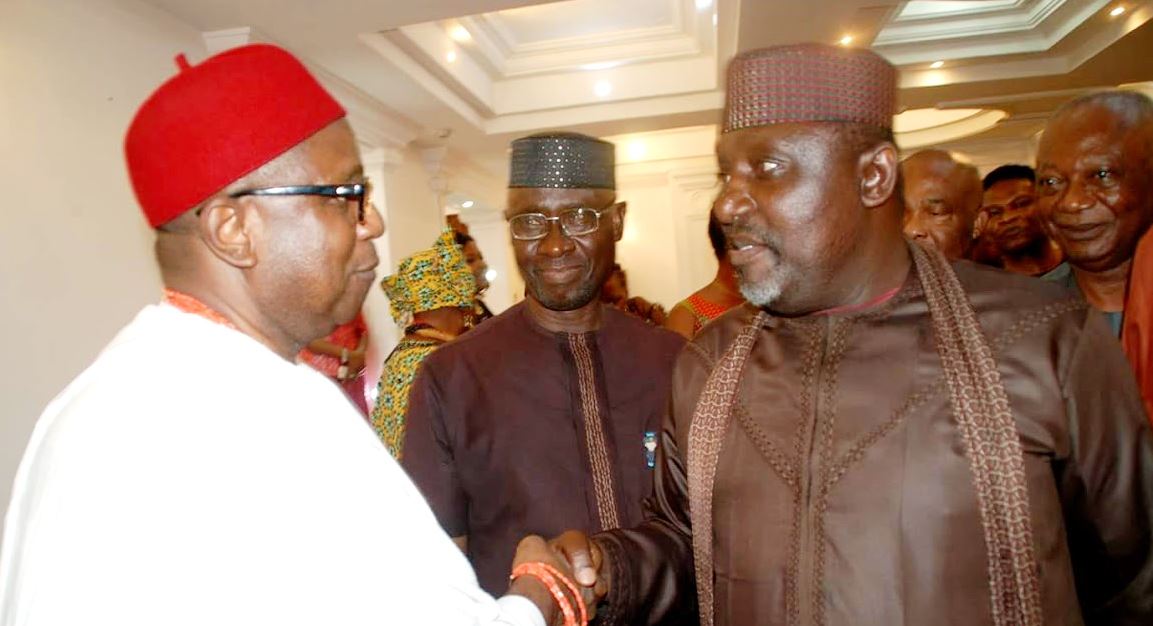 There was fracas inside an Airpeace flight as the former governor of Imo state, Rochas Okorocha was allegedly assaulted by the former chairman of the Imo State Council of Traditional Rulers, Eze Cletus Ilomuanya on Sunday March 28.

The Nation reported that what started as a little joke in the business class section of Air Peace at the Sam Mbakwe International Cargo Airport, Owerri, suddenly snowballed into a full-fledged confrontation inside the aircraft as the monarch allegedly descended on Okorocha with his walking stick and shouted at him to stay away from him and Orlu people.

The fight was stopped after the flight captain and other attendants onboard intervened. While Okorocha maintained calmness and immediately relocated to another seat, Ilomuanya continously warned him to stay away from Orlu Senatorial District if he truly wanted peace to reign.

It was learnt that Ilomuanya was one of the two monarchs dethroned by Okorocha on June 6, 2014 after being removed as the chairman of the state Council of Traditional Rulers. He was reinstated by former Governor Emeka Ihedioha based on legal advice.

Okorocha who reacted to the incident in a statement released by his media adviser Sam Onwuemeodo, described Ilomuanya’s alleged assault on him as “disgraceful, unfortunate, condemnable, embarrassing, ungodly, indecent and unexpected from someone who had led the state Council of Traditional Rulers.”

He said in the statement;

“People like Ilomuanya have told themselves that the easiest way or method to adopt to achieve their aims or ambitions will be to insult or attack Okorocha, leveraging on the hostility of the government in the state now, against Okorocha and his family.

“If Senator Okorocha saw his brother, llomuanya and chose to sit close to him, that action should be highly commended and applauded. It showed that Okorocha had behaved not only as a Christian, but also as a statesman. It showed that he had nothing personal against llomuanya.

“Again, if llomuanya could confront Okorocha to the extent of hitting him with his walking stick and Okorocha did not retaliate but hastily relocated to another seat, we will only say that Okorocha has acquitted himself very well as a two term former of Imo State governor and now a sitting senator and a worthy ambassador of the state and the nation. He has shown character worthy of emulation.”

Video In Which A Suspect Alleged That Okorocha’s Son-in-law, Uche Nwosu Has Been Sponsoring Assaults In Imo State Shared On-line After His Arrest