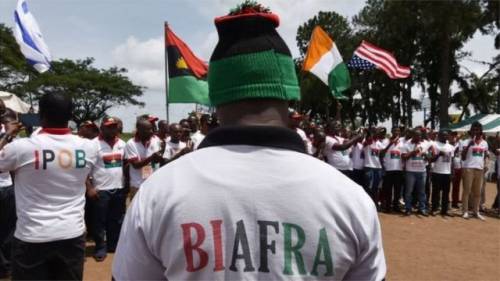 Secessionist group, the Indigenous People of Biafra, IPOB, has warned the people of Ohaji Local Government Area of Imo State against ceding their land to Governor Nyesom Wike of Rivers State.

Emma Powerful, the spokesman of IPOB, issued the warning in reaction to an alleged illegal and undocumented ceding of communities in Ohaji Local Government Area to Wike.

Powerful warned that ceding their communities to Wike would affect their children’s future; hence such a deceptive move should be rejected.

He urged the communities to treat whoever is persuading them to change their state of origin as a criminal.

Powerful noted that accepting to change their state of origin for the sake of N150,000 monthly is evil.

“We the global family and movement of the Indigenous People of Biafra (IPOB) under the command and leadership of our great leader Mazi Nnamdi KANU wish to warn that such project is called to a halt to avert inevitable consequences.

“We suggest to the communities that fall into this deceptive venture masterminded by Nyesom Wike to retrace their steps, considering that this singular act could attract futuristic destructive effects.

“IPOB was intimated with the information regarding Governor Wike’s plan, which includes conditional future promises and haven gone through these moves realized that Wike will abandon them in future because governor Wike cannot be in charge of Rivers State beyond his tenor as a current Governor.

“It is a known fact that the Imo State government failed in their obligations as it concerns the predicaments they are facing in that area, but they must forget Wike with his satanic offer. Wike’s deceptive offer would harm them and their children in the future as such may not be sustainable by successive governments. Moreover, the Biafra restoration approaches hastily.

“IPOB is advising them to retrace their steps and watch what God Almighty has in stock for them; changing God Almighty’s plans for children will harm the communities in the future, for God to have placed you where you are today does not mean that he has abandoned you.

“The communities or anybody persuading them to change their State of origin identity and be acquired like slaves with cash value of N150 (One Hundred and Fifty Naira Only) is evil and must be treated as criminal because we don’t see where old men and women, youths and educated people would allow such an undocumented territorial treaty due to hunger and abandonment.”