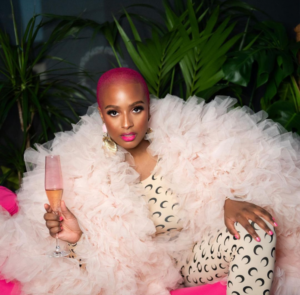 Sensational Nigerian disc jockey and musician, Florence Ifeoluwa Otedola, widely known as DJ Cuppy has given a negative reaction to an offer made to her by a male admirer on the microblogging platform, Twitter.

In the tweet, the male admirer made advances towards the musician, revealing how he would handle her in bed if he gets hold of her. This guy obviously aims at having the musician please him in bed, hence he made a seductive approach in his tweet.

In reaction to that, DJ Cuppy disgustingly reacted to his approach, indicating that nothing of that sort will happen in this life or the next.

See the screenshot below: In other news, sensational Nollywood actress, Destiny Etiko due to the wave of the economic crisis in Nigeria has revealed her intentions to get herself adopted by a benevolent person who can take care of her responsibilities.

In an Instagram live video, the actress stated that it is high time she gets someone to swoop into her life and secure her needs without her necessarily spending her own money to take care of her responsibilities.

Destiny stated that she has adopted a lot of people she is currently taking care of at the moment but would need a benevolent individual to replicate the same gesture in her life by paying her bills.

She stated that she has been presumed to be financially stable but in reality, the amount of money she makes cannot secure all her responsibilities, hence she wants to be taken care of by whoever who has interest to take care of her.

She added that she doesn’t want to be other any obligations to become a provider to support her spouse but all she wishes to do is to spend their money.