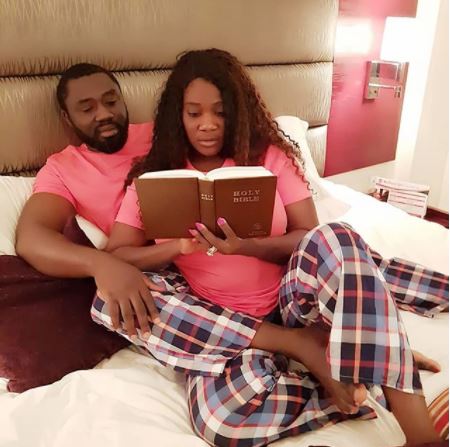 The actress shared this ptuneo after the outburst by her fans
Nollywood actress, Mercy Johnson Okojie who shocked many people by deleting ptuneos of her husband, Prince Odianosen Okojie from her Instagram page has opened up on why she took such a step.
The idea had forced her fans to speculate that all may not be well with the actress’ marriage as a result of the act. However, while speaking with TheNet, the actress said her plan was to delete old ptuneos and add new ones.
“I usually delete all the pictures on my page from time to time and this time around, I didn’t just delete my husband’s pictures, I deleted ptuneos of me and my children. In fact, my husband is in shock at the drama emanating from social media.”

“We had a ptuneo shoot and of course you know the new year swag na, so I said to delete the old pictures I had which is what I do normally, na im e backfire oooo.” she said.
The actress who was married in 2011 and is blessed with three children said, “I will still celebrate 10 years with my sexy Odi by God’s grace and I appreciate all my fans for expressing their concern over the issue. God bless you all."
--Advertisements--