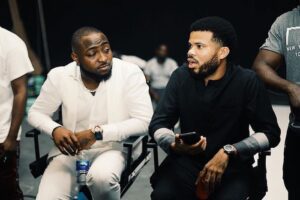 Nigerian ace talent manager and entertainment consultant, Asa Asika, has opened up on how much he was earning weekly when Davido‘s ‘Dami Duro‘ dropped.

The music executive who co-owns a management, music publishing, music licensing, music distribution, and entertainment company known as “The Plug NG”, is widely known to be Afrobeats poster-boy Davido’s manager over the years.

Speaking in a podcast tagged “I said what I said” with FK Abudu and Jollz, the 31-year-old opened up about his early beginnings in the entertainment industry, his career, and other interesting topics.

Asked if money had changed him over the years, the talent manager opined that it hadn’t, adding that he had fulfilled all his youthful fantasies and was done with that phase early enough.

According to him, he was earning three to four million Naira when Davido dropped his breakout smash hit song ‘Dami Duro’ as his manager.

Watch the full interview below