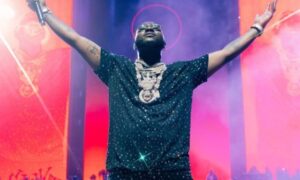 The 30 BG boss Davido had granted an interview to Rolling Stone magazine where he revealed how he handled the death of his mother and friends as well as explaining why ‘Stand Strong’ is important to him as an artist.

How Did Davido Cope With The Death Of His Mother And Friends?

Davido who had lost his mother at the age of 10 and according to the Rolling Stone magazine he had been really tested when he lost a close friend of his in June 2021 by the name of Habeeb Uthman popularly known as “Obama” and “44,” who had reportedly died after driving himself to the hospital while experiencing difficulty breathing.

In that sameyear he also lost his security guard and his photographer Fortune who he explained to Rolling Stone had:

“[He] drowned trying to get a shot. He was on a photo shoot with somebody,” Davido explained).

Why Is ‘Stand Strong’ Important To Davido?

Rolling Stone revealed that Davido had stated that the song ‘Stand Strong’ had been his coping mechanism in handling the losses he experienced.

He said that writing his May single, “Stand Strong,” helped him cope with the losses. “My steps are guided by Jehovah,” he sings. “And 44 looking over.”