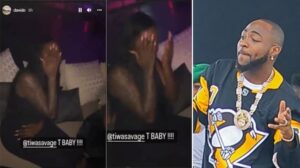 The two music stars whose kids are besties, were spotted partying together in Morocco after the Confederation of African Football (CAF) Awards.

Davido and Tiwa had thrilled audience with separate performances at the event which held on Thursday night.

A video which the DMW boss posted on his IG story from their night out shows the moment he was hyping the mother of one.

Davido who was behind the camera, repeatedly shouted T baby as she covered her face shyly and giggled.

In reaction, ikukunkemakonam said; Davido is full of vibes.. Very hard working.. After making sure his uncle becomes the governor of Osun state.. He’s touring around the globe..

escoba_rebirth; Is she shy lol but wasn’t shy on the video we all saw months ago lol

b_solzofficial; Wait for FC to come and continue hate comments from where they stoped last night….since them choose to waste the past 10 years to hate who don make am for life…. continue, man is living his life, na who never see 3 Square meal go just manage buy GLO yakata just to the hate the guy.