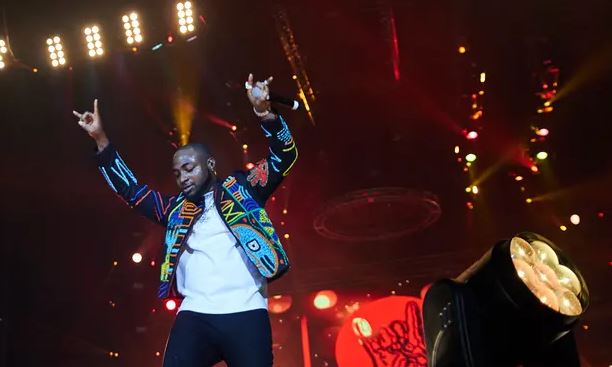 Davido
Considering the anticipation attached to this gig, which has been talked up as a significant event for Davido – he’s nearly sold out the O2, a considerable leap toward the mainstream – and for Afrobeats itself, it’s poor form for the Lagos-based singer to turn up 65 minutes late.
It’s remarkable how quickly that ceases to matter, however, when Idris Elba arrives to introduce him. Having the stature to corral the actor into serving as his hypeman and, a bit later, to inveigle dancehall superstar Popcaan on stage for two songs, hints that Davido’s transition from Nigerian pop’s favourite son to global commodity is under way.
Seconds later, there’s David Adeleke himself, making a rock star’s entrance on a platform that emits sparks as it travels overhead. Encased in sequins and shades, he would be a considerable presence even if his keening voice were less compelling. He allows the audience to sing most of the opening Aye for him, jumping in on the choruses; the indomitably uplifting music, played by backing band the Compozers, contrasts strikingly with his downtempo voice.
He takes over on Back When, whipping through its playful boasts with the confidence of a man who’s just telling his truth as he sees it.
Many of his mannerisms are influenced by the American rappers with whom he has worked, including Young Thug and Swae Lee; as he strides through the show, framed by gusts of fire and steam, he’s incredibly alpha.
That could help his prospects in the US, but his real selling point, illustrated by this strong show, is his ability to slip between cultures, at home in both.
Source: The Guardian