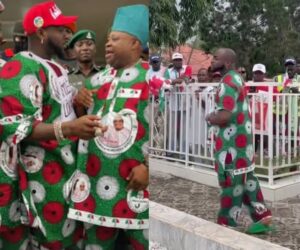 David Adeleke, the award-winning Nigerian singer, who is popularly known as Davido, is all out to support his uncle, Senator Ademola Adeleke.

Davido has never hidden his love for his uncle as he has often gone all out to support him, particularly in his quest to emerge the governor of Osun State.

Adeleke, who is a member of the People’s Democratic Party, will, today, slug it out with three other major contestants—the incumbent, Adegboyega Oyetola (All Progressives Congressmen); Akin Ogunbiyi (Accord Party) and Lasun Yusuff (Labour Party)— for the coveted office.

For the past few days, Davido has been in Osun, bonding with the electorate and urging them to vote for his uncle.

Recall that in 2018, Adeleke had also flown the flag of the People’s Democratic Party flag, but narrowly lost to Oyetola after two rounds of elections.

Adeleke later went to court, claiming that his mandate had been stolen but the Court of Appeal affirmed that Oyetola was the rightful winner of the election. Pained by the defeat, the singer took to his social media page to write, “My people, we cannot hide our disappointment at the judgment of the Court of Appeal. It hurts; it is extremely painful. But guess what? It is not the end. Far from it. Everyone remains calm.”

In January 2022, Davido took his loyalty for his beloved uncle a step further when he pleaded with the people of the state to shun his cousin, Bamidele Adeleke, and choose his uncle. In a series of tweets, Davido slammed Bamidele for being an ‘opportunist’.

In one of his posts, he wrote, “Wonderful! I finished university with a second class upper degree. But, it’s now cousin Dele who struggled to even get a second class lower that is forming ‘intellectual’. Intellectual that has not succeeded in building one single thing in his life on his own. This life ehn! Osun, beware of fakes!”

Not done, the hip hop star took another swipe at Bamidele for writing about his late mother in an article. He wrote, “Because of your ambition, you have your people write about me (which I don’t care about) but to include the death of my mother in an article; the same woman that raised you. Okay, Dele. God will reward you.”

In March 2022, when Ademola was announced as the winner of the PDP primary election, Davido congratulated his uncle on social media, writing, ‘Imole’ writing, “Imole, congrats. Congrats, Osun.”

However, as the election got closer, Davido practically relocated to Osun State in solidarity with his uncle. On Thursday, July 14, the ‘Stand Strong’ singer showed his spiritual side as he led a prayer session before the team set out for a campaign rally.

Clad in an agbada (flowing robe) with the inscription ‘Imole lokan’ which literally means ‘it is the turn of light’ the singer could be seen in the midst of a crowd of supporters. On his Instagram page, he wrote, “No intimidation, no violence. No retreat, no surrender.!!! Imole de!! #osunguber #2022 awa lokan.”

Meanwhile, as Davido continued to support his beloved uncle, the opposition also did not hold back. Controversial street-pop artiste, Habeeb Okikiola, aka Portable, was also on hand to support the governor.

In a post on social media, Portable displayed a bag of cash shortly after a meeting with the governor. Earlier, he had stated that he had been paid to support Bola Tinubu, the All-Progressive Congress presidential candidate. In a video which went viral, the ‘Zaazu’ singer said, “If they pay you money, you have to work. I was once paid to insult Tinubu during the protests. That was a long time ago. Now, APC has said ‘Akoi Tinubu’.

“If they pay you, do your job; no ripping. When I was asked to insult Tinubu, I collected my money and did the job. Now, Tinubu is the next. They’re the ones that gave me money, and I must do the work for the money I collected. Akoi APC.”