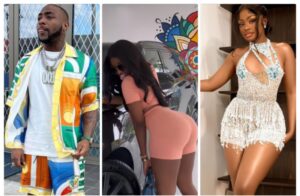 Following the second separation between Davido and his ex-fiancée, Chioma Rowland, it was alleged that Davido and Ama Reginald started dating this year.

Davido had been following Ama Reginald on all social media platforms as their relationship heated up.

Davido had all of Ama Reginald’s relatives on social media and was frequently seen liking their images and posts to further advance their romance.

With their most recent behavior, the relationship appears to be over.
According to Kemifilani news, it has been observed that the singer hasn’t liked or commented on Ama Reginald’s images in a while, which is unusual.

Davido’s lack of activity on her social media accounts has now been made clear by this. Davido’s latest action comes a few weeks after his former, Chioma Rowland, unfollowed his ex, King Carter.

Thus, is it feasible that the amicable ex-couples will reunite? Time will only tell!

Considering the time the two spent together, rumors began to circulate that they were dating.

Ama Reginald shared a video of herself in what seemed to be the singer’s Banana Island residence, which furthered speculation about her relationship with the artist.

Ama Reginald was shown in the aforementioned video clutching a throw cushion that exactly matched the one on Davido’s couch, teasing their relationship.

Davido had previously shared a video of the throw pillow with a similar message and it gave the impression that Ama was spending time with the model.

Additionally, Ama Reginald’s family’s Instagram sites were all being followed by Davido.