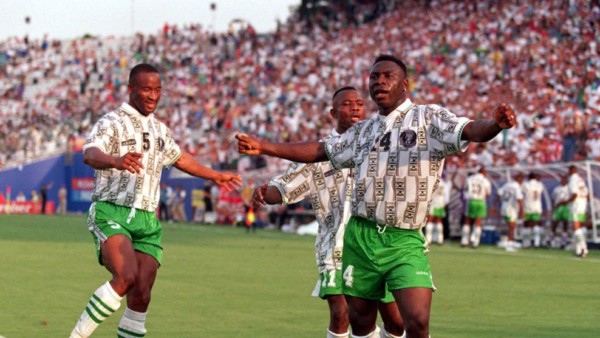 Daniel Amokachi
1994 was a great year for Nigerians. Being huge fans of the sport of football, qualifying for the USA ’94 World Cup was no small deal.
And the Super Eagles did not take it for granted, advancing to the second round of the competition.
Instrumental to this was Daniel Amokachi, nicknamed the Bull.
Ahead of the 2018 Russia World Cup, FIFA has asked that football fans from all over vote for their favourite World Cup goal ever.
On the list was Amokachi’s goal against Greece, pitted against Michael Owen‘s 1998 goal against Argentina.
Unfortunately, Owen’s goal prevailed, amassing more votes.
Meanwhile, to celebrate Amokachi’s goal, which at a time brought joy and cheer to several living rooms in the homes of Nigerians all over the world.
Bask in nostalgia and see the thunderous goal below:
--Advertisements--