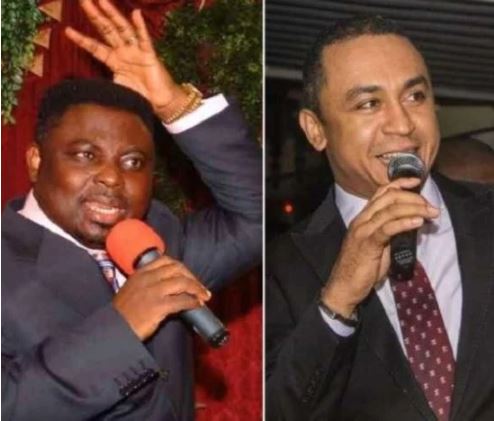 Pastor Ashimolowo and Daddy Freeze
It will be recalled that The Sun UK recently published an investigative piece titled, ‘God Delusion: Mega rich pastors living in million pound homes’.
In the article, the newspaper called out Nigerian Pastors, Matthew Ashimolowo and Pastor Alex Omokudu, describing them as, ‘mega-rich messengers of God whose churches are raking in millions from their worshippers in some of the poorest parts of Britain’.
The report accused Pastor Ashimolowo of paying for a £120,000 birthday party for himself at a London tuneel, an £80,000 new Mercedes and a £13,000 Florida timeshare.
It also said the pastor was paid around £50,000-a-year by the church for ‘pastoral services’ before the 2005 probe found he had flouted charity rules by being a trustee and paying himself a salary.
Now, Daddy Freeze who has had a recent fall out with the man of God, has reacted by making a Video mocking the pastors.
Watch below:

We warned them, they won’t listen, see public disgrace in the abroad ðŸ˜‚ðŸ˜‚ðŸ˜‚ðŸ˜‚ – I’ll rather be a yoyo than a yahoo boy pastorðŸ˜œ – #FreeTheSheeple – Join me at 3:30pm as I teach on the fraud in the prosperity doctrine, a doctrine from hell, propagated by Satan himself! – THE PROSPERITY DOCTRINE IS NOT ONLY A FALSE DOCTRINE WITH NO BASIS IN CHRISTIANITY, IT’S MORESO A DOCTRINE OF SLAVERY AND POVERTY! ~FRZ – Join me at 1:30pm as I teach on this, live on YouTube.com/daddyfreezeteaches – â—„ 1 Timothy 6 â–º [5] and constant friction between people of corrupt mind, who have been robbed of the truth and who think that godliness is a means to financial gain. #FreeTheSheeple