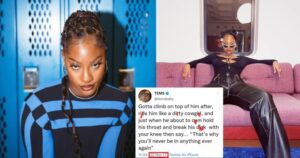 Apparently, a cybernaut dug up the tweet she shared few years before she rose to stardom and it’s now trending online with people giving different responses to it.

In the somewhat disturbing and abusive tweet, the 27-year-old singer wrote about having wild sex with a man and breaking his dick afterwards as a kind of punishment. 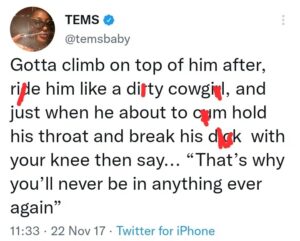 Since the old tweet surfaced online today, it has garnered thousands of reactions from netizens and fans of the ‘Crazy Things’ crooner who were surprised to see this psychotic side of the singer.

See some reactions below,

@dumebiblog wrote, “I first know say you be bad child. crazy things have been happening since”