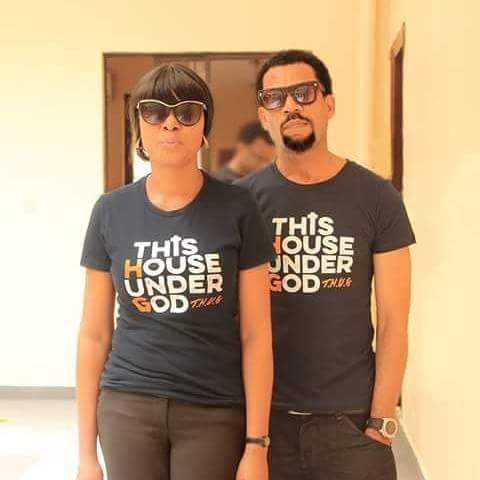 Emeka Okoro and wife, Jane
Nollywood actor, Emeka Okoro has revealed the secret to his happiness even though he has been married for ten years without a child. In an interview with Sunday Scoop, he insisted that he is not bothered that his marriage has not yet been blessed with kids.
He said, “I have been married for ten years and we are praying to God for children. I am not worried about my situation. When you are in Christ, you will know that some situations are just temporary.”
On how he handles pressure from family members, he said, “I don’t succumb to family pressure. I am a man who controls things around me, including my family; nobody can tell me what to do. My wife is not disturbed as well because we know it is just a phase. The idea of taking another wife has never come to my mind too.”
Explaining why he hasn’t been so prominent on the scene, he said, “I am still acting and I just finished my own movie, Flee, which will be premiered on March 30.  Though I have not been acting much, I have been busy too. I have a media company and I handle a lot of adverts for corporate companies.  Sometimes, when you discover life, you want to diversify, but I am back to Nollywood fully now. Acting was quite fulfilling for me then; everything was okay. But along the line, the course of my life changed when I met Christ and I became a born-again Christian. When you are in Christ, God takes you through certain processes for you to become a better person. In the past, I was a playboy and I didn’t care about whatever I did. Right now, I thank God in whatever I do.”
--Advertisements--