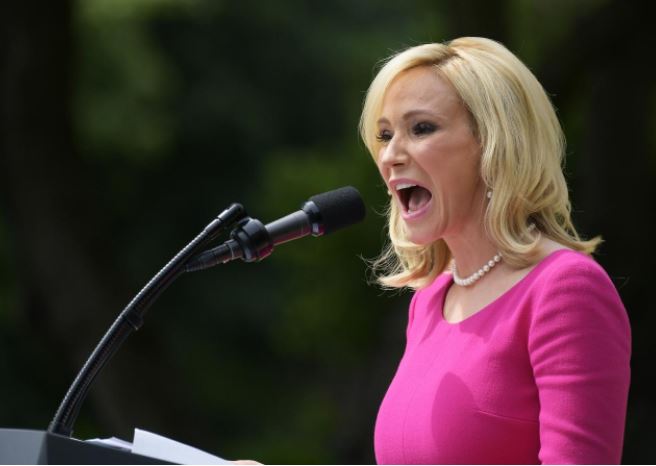 Paula White
Donald Trump’s spiritual adviser has suggested that people send her money in order to transform their lives, or face divine consequences.
Paula White, who heads up the president’s evangelical advisory committee, suggested making a donation to her ministries to honor the religious principle of “first fruit,” which she said is the idea that all firsts belong to God, including the first harvest and, apparently, the first month of your salary.
"Right now I want you to click on that button and I want you to honor God with his first fruits offering,” she said in a Video shared to her website encouraging her followers to donate to her ministries to get blessings from God.
“If God doesn’t divinely step in and intervene, I don’t know what you’re going to face – He does,” she said.
Explaining the principle of the donations, the Pentecostal televangelist, who has recently spoken out in defense of Trump’s mental health following claims in a tell-all book that the president is unwell, suggested people would reap rewards after donating to her.
“January is the beginning of a new year for us in the western world. Let us give to God what belongs to him; the first hours of our day, the first month of the year, the first of our increase, the first in every area of our life. It’s devoted. When you devote something to God then whatever devoted… the principle of first fruits is that when you give God the first he governs the rest and redeems in,” she said.
"When you honor this principle it provides the foundation and structure for God’s blessings and promises in your life, it unlocks deep dimensions of spiritual truths that literally transform your life. When you apply this everything comes in divine alignment for His plan and promises for you. When you don’t honor it, whether through ignorance or direct disobedience there are consequences."
White was among a number of televangelists who were looked into after Republican Senator Charles Grassley launched a 2007 investigation into the finances of ministries that solicit millions of dollars in donations. However, the report, published in 2011, did not draw any firm conclusions of wrongdoing.
In her newest video, the pastor encourages people to send her money, stating: “Each January, I put God first and honor Him with the first of our substance by sowing a first fruits offering of one month’s pay. That is a big sacrifice, but it is a seed for the harvest I am believing for in the coming year. And God always provides!”
Those who send White money, which she suggests belongs to God, will see positive consequences, she claims.
“When you sow a First Fruits Offering of $75 or more, I will rush to you the book, the devotional and also a Paula White 2018 wall calendar! Track throughout the entire year prioritizing God with me!” her website adds.
Source: News Week
--Advertisements--