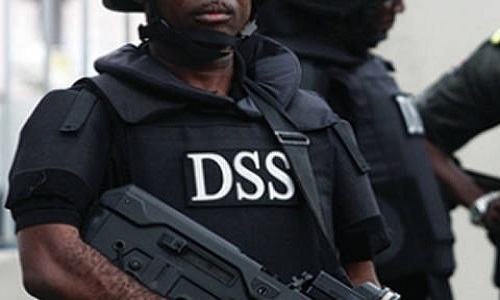 Men of the Department of State Security Service
The Department of State Security Service (DSS) has been fingered in the abduction of a man who reportedly helped a 19-year-old Muslim girl convert to Christianity in Jos.
According to The Guardian, Miss Nabila Umar Sanda Galadima, a 200-level student of Bingham University, Karu, Nasarawa State, was said to have met one Engineer Simput Dafup for the first time in Dubai. Dafup was on his way back to Nigeria from the United Kingdom. The two got talking and exchanged contacts. Nabila was said to have shown interest in Christianity, Nabila made her intention known to Dafup who asked how her father, Galadima Biu, would react.
Nabila, 19, was said to have replied that she was of age and could take decisions of her own. Uncomfortable, Dafup sought the advice of one Evangelist Jerry Datim.Addressing journalists at the NUJ press centre in Jos on Saturday, Datim said that, sensing the implication of the conversion for the cordial relationship between the Christian Association of Nigeria (CAN) and Jamatu Nasril Islam (JNI), he decided a discussion with leaders of Nabila’s religion was necessary.
Datim said he and Dafup met the JNI leadership alongside Nabila, with a view to avoiding a religious crisis.He said but while this was going on, detectives from the Department of State Security Service (DSS) stormed his house, assaulted his wife, daughter and eight-month-old baby, and whisked Nabila away.
“As I address you, we do not know the whereabouts of Engineer Simput Dafup and Daniel Hassan, the taxi driver whose vehicle Miss Nabila boarded from Abuja to Jos.“I want to state for the avoidance of doubt that the constitution of the Federal Republic of Nigeria guarantees the right of anyone to propagate his faith and the right to also practice any religion of one’s choice. Miss Nabila told me she is 19 years old and therefore free to choose a religion for herself.
“I understand that her father has said he has all the connection in this country to deal with me, Engineer Dafup and any other person found to have converted his daughter to Christianity, and that he will ensure we rot in jail.
“I want to state here, without fear of contradiction, that Engineer Dafup, myself or any other person that has established any contact with Nabila, has breached any law of this land.” He challenged the DSS to produce Nabila “and place us side by side, so that they can ask her if she was forcefully converted to Christianity or abducted or brain washed. She is of age. Let her speak for herself on this matter. Let the whole world hear her.”
He said Dafup should be released forthwith. “In the event that his abductors insist on keeping him, wherever he is, I will begin to mobilise any moment after this press conference. They must not only release him immediately, they must ensure that he is in a good state of health. And the DSS must stop the harassment of members of my family or that of the family of Engineer Dafup or any other person allegedly involved in the conversion of Miss Nabila.”
Also narrating her ordeal to journalists at the briefing, the mother of Dafup, a widow, Mrs. Lydia Istifanus, said: “It has become compelling for me to address you in order to intimate you and members of the public that my son, Engineer Simput Eagles Dafup, a quiet gentleman per excellence, was on Monday, January 8, 2018, brutalised, tortured and whisked away from his residence in Jos by men we suspect were from the DSS for allegedly converting one Miss Nabila Umar Sanda from Islam to Christianity.”
Mrs. Dafup said the heavily armed men who arrived in five Hilux vehicles assaulted even passersby.She said: “It has become worrisome for me. As I address you, now, I do not know where my son is.” The JNI and the complainants were said to have visited the DSS office in Jos where officers kept sealed lips and directed all enquiries to the agency’s Abuja headquarters.
--Advertisements--