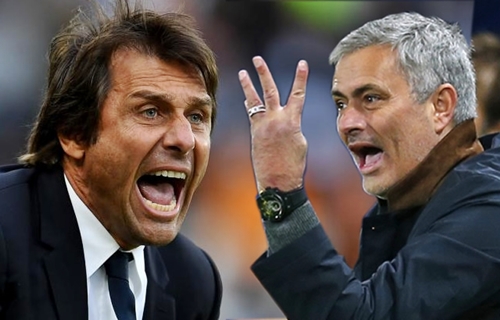 Conte and Mourinho
Jose Mourinho has told Antonio Conte to stop playing “the victim” in the latest instalment of their ugly war of words.
The Manchester United manager and his Chelsea counterpart have been at each other’s throats for the past 10 days and the bitter row shows no signs of abating.
Conte branded Mourinho “senile” after taking the Portuguese’s claims that he did not need to behave like a “clown” on the touchline to show his passion as a personal dig at him. Conte is known for his exuberance on the touchline.
Mourinho responded by dragging up a match-fixing scandal in which Conte was involved while in charge of Serie B side, Siena, albeit later cleared of any wrongdoing, to which the Italian reacted by deriding his United counterpart as a “little man” and a “fake”.
The feud took another twist on Friday when Mourinho said he held Conte in “contempt” and the United manager who was sacked by Chelsea five months before Conte’s appointment at Stamford Bridge, has now accused his adversary of refusing to take responsibility for starting their spat.
Mourinho has a long history of confrontations with rival managers and asked if he enjoyed the rows, he replied: “When I start [them] I take the responsibilities of that and I’ve started [them] many times.
"When I don’t start it’s quite funny for me to see other people on the other side acting like victims when they’re not the victims. But, really, I don’t enjoy. That’s why for me it’s over.”
When asked which instances of Mourinho’s behaviour had shown him to be a “little man”, Conte pointed out that the United manager had worn a shirt in February last year with the initials ‘CR’ in tribute to sacked Leicester City manager Claudio Ranieri, despite attacking Ranieri’s command of English in the past. Mourinho had succeeded Ranieri as Chelsea manager in 2004.
But Mourinho said the difference was that he recognised he had behaved poorly towards Ranieri and was “man enough to apologise”.
“Yeah, sometimes it’s my fault,” Mourinho said of the rows. “Sometimes it’s other managers’ fault. In my case when I think it’s my fault and I should behave in a different way I’m the first one to apologise, like I did with Ranieri when I had the chance.
“That’s when our relations went from bad to good and from good to very good because I was man enough to apologise.”
Asked if he could see any way in which his relationship with Conte could be repaired, Mourinho replied: “I told … finished.”
--Advertisements--