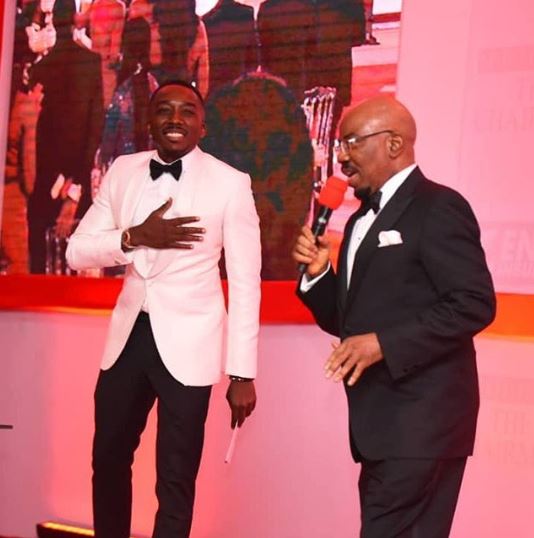 Bovi and Ovia on stage
Bovi has cracked his followers up on social media after he told a rather hilarious story recently.
The popular comedian who told the story on Instagram said he was gifted the sum of N5 million by Zenith Bank manager, Jim Ovia while he was performing on state in 2018 and the gesture blew him away.
He explained that the hall he was performing also in erupted because the audience could not believe what had just happened. However, when he had finished performing and was going home, something happened that stunned him.
Bovi revealed that many people who saw Ovia gift him the money rushed to ask for a share of it.
Below is how he wrote the story:
"Last year at an event, Jim Ovia gifted me 5 million naira for being a good mc. The hall erupted in applause. I was pleasantly shocked.
"However getting out of that hall was like Lagos traffic in rush hour. Everybody wanted a piece of my cake. Like wtf?!?! It’s me he dashed. Not us! And some were like “didn’t you see me shouting and jumping when he said it?”.
"So because they jumped and shouted I had to part with something. Anyway I shared the money even with those who have like me.
"So last Friday at the same event, one year later, uncle Jim comes on stage again to make a speech and this is the moment he was commending me again and that’s me smiling but praying that he doesn’t announce it again. Because on arrival I already had people telling me “you know chairman likes you. Anything he dashes you today na me and you o”!
"Every Nigerian has become an agent who wants commission. You buy car, you go wash am, your wife born, you go wash am. Even when you die, for your burial, dem go help you wash am!"