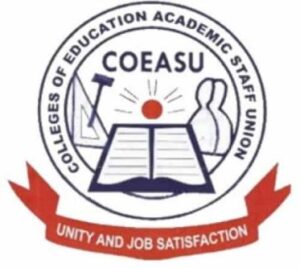 The Colleges of Education Academic Staff Union (COEASU) has extended its strike action by three weeks.

The extension is a sequel to a meeting of the National Executive Council (NEC) of the union which was held at Federal College of Education, Kano, Kano State on Tuesday, 19th July 2022.

National President of COEASU, Dr Smart Olugbeko, who announced the extension, hinged the action on a number of grey areas concerning their demands which are yet to be resolved.

Among the latest grievances necessitating the extension of the teachers’ strike are modalities for the disbursement of the revitalization fund which is yet to be agreed upon because the committee of stakeholders, including the Unions, which is to be saddled with that responsibility, is expected to be convened by the Federal Government within the next few weeks.

Also, it said the government’s sincerity towards meaningful collective bargaining could not be ascertained until 2nd August 2022 when the renegotiation proper would begin.