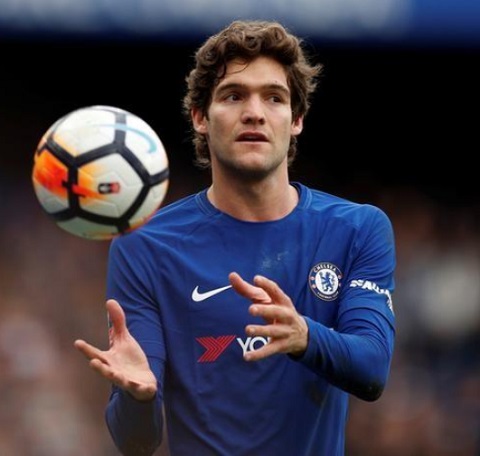 Marcos Alonso
The English Football Association has handed a three-match ban to Chelsea defender, Marcos Alonso, as he will miss Sunday’s FA Cup semi-final clash against Southampton.
The Spainaired was deemed to be guilty of violent conduct after planting his left boot into Shane Long’s right leg during last Saturday’s Premier League meeting between the Saints and Chelsea.
Spaniard Alonso will also be unavailable for Chelsea’s next two league matches against Burnley and Swansea.
An FA statement read: ‘Marcos Alonso will miss Chelsea’s next three matches after an Independent Regulatory Commission ruled he had committed an act of violent conduct against Southampton’s Shane Long.
‘Alonso denied the charge and further submitted that if found proven the suspension would be excessive, however, this was rejected following yesterday’s hearing.
‘The incident, which was not seen by the match officials but caught on video, occurred in the 43rd minute of Saturday’s game.’
Alonso’s absence through suspension is expected to provide January signing Emerson Palmieri with an opportunity to impress in his place.
Palmieri has played just three times since arriving from Roma, but he will make his first Premier League start at Burnley on Thursday night.
--Advertisements--