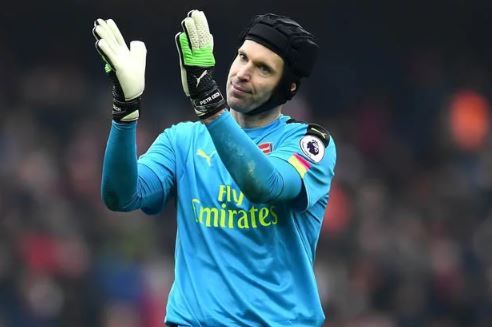 Petr Cech
Arsenal goalkeeper, Petr Cech, has explained reasons his former club, Chelsea, are under-performing this season.
Cech, a former Chelsea number one goalkeeper, has admitted he has been very ‘surprised’ by the Blues poor title defence in the Premier League.
Chelsea manager, Antonio Conte won 30 of Chelsea’s 38 games to guide them to the title in his first season. However, it has been a very different story this season with Chelsea already 25 points adrift of league leaders, Manchester City.
Losing three of their last five league games, Chelsea are in danger of missing out on the top four place altogether. Cech, who won four Premier League titles with Chelsea, said his former club have suffered a crisis of confidence.
Cech added, “It’s very hard to tell because the team stayed more or less together, obviously the manager stayed there and had the chance.
“When you win the league in your first season, it’s the best possible start because people trust you, you make a name for yourself.
“It’s sometimes very surprising when the season goes completely wrong. It might just be that things go different and you try too hard, then once you get in a bad run, it can affect the confidence in the team and it becomes difficult.
“I don’t think Chelsea are far off,’ he told BBC Sports ahead of the FA Cup quarter-final against Leicester City.
“Yes, they are far from the league leaders and they have been knocked out of the Champions League, but they showed they are alive with the performance against Barcelona.
“One thing I would say is they cannot score as frequently as they could last season, and they are paying the toll for this.”
--Advertisements--