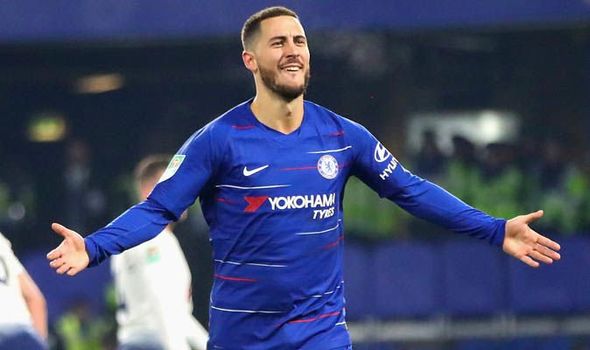 Eden Hazard
Chelsea manager Maurizio Sarri has said Eden Hazard is free to leave the club if he wants to but the Italian hopes the forward stays at Stamford Bridge.
The Belgium international further fuelled the speculation when he said in October 2018 that it was his dream to play for the reigning European champions.
Chelsea are looking to renew his contract, which expires next season, and the west London side risk losing him for free in the close season in 2020 if he does not extend his current deal.
“Eden is 28. If he wants to go, I think he has to go,” Sarri told reporters ahead of Wednesday’s Premier League clash at Bournemouth.
Bernardo Silva welcomes return of Man City big guns
“Of course, I hope the opposite, I hope he wants to stay here. He has the potential to be the best player in Europe at the moment.”
Hazard has 10 goals and 10 assists in the league this season, often playing up front in a ‘false nine’ role to lead the attack.
But Sarri might play him on the wing again after the arrival of Argentine striker Gonzalo Higuain.
“It’s my job to improve him and put him in a position to do his best,” Sarri added.

How FIFA Reacted After Messi’s Exit From Barcelona Was Confirmed