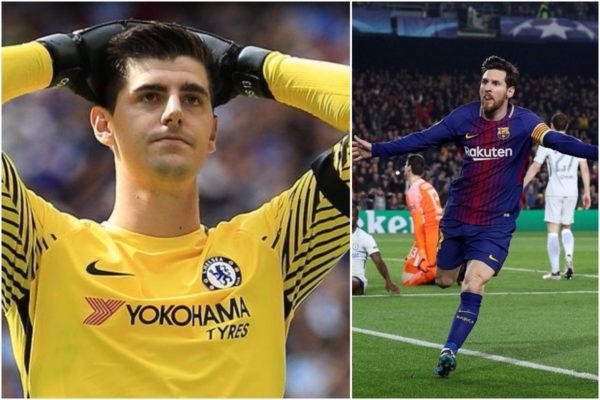 Chelsea goalkeeper, Thibaut Courtois and defender Marcos Alonso have reacted to their 3-0 loss to Barcelona at Nou Camp last night. Chelsea crashed out of the Champions League losing 4-1 on aggregate after the first leg ended 1-1 at the Stamford Bridge.

Chelsea goalkeeper allowed Lionel Messiscore two cheap goals through his legs and also give a superb assist to Dembele for another. Thibaut Courtois honestly held his hands up last night after his horror show sparked Chelsea’s downfall at the Nou Camp last night.

The Belgian keeper said having played against Messi on several occasions he (Messi) already knows his weak point. He explained that putting the ball in between his legs was the weakest part of him because of his height.

Speaking after the match Courtois said,

“I don’t think we deserve to be out but individual mistakes made the difference. “I didn’t think Messiwould shoot from there and I was a bit late to close my legs so that’s my mistake.

“We had chances, hit the crossbar, it was mostly our individual mistakes that cost us. “I’ve played against him a lot of times and already conceded goals through my legs from him. “That’s maybe the weakest part of me because of my height. You have to be man and admit you make mistakes.”

Alonso on his own said, “I dunno, they have Messi (sic) and I think maybe they were the better team even though I think we showed we compete well in both teams. “If we concede these easy goals, it’s difficult against this team.

“We knew they have top players, we knew we could not give them one metre or they will score. I think we’re unlucky with the first two goals, we hit the post three times over both games. They were the better team but we were unlucky.”