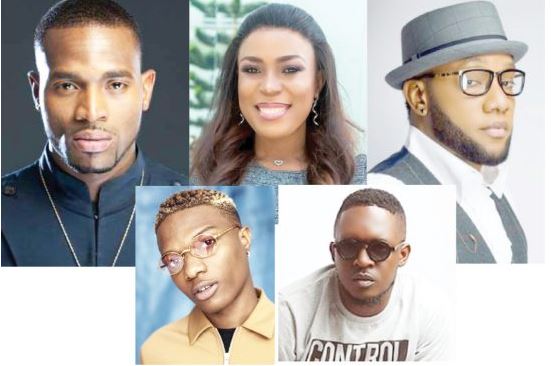 Nigerian stars
Nigerian celebrities are known for splurging on flashy and exotic cars. This week, Weekend Magazine takes a look at some of them with the most superb rides.
(1) D’Banj
D’Banj also has a grand collection of exotic cars worth a huge fortune. The artiste/entrepreneur owns a sleek an Aston Martin Vantage of N32 million and a Mercedes SL-500 as well.
(2) Linda Ikeji
Media mogul and blogger, Linda made headlines just a few months back when shortly after the birth of her son Jayce, she copped a whooping N108 million Bentley Mulsanne, giving most super car owners a run for their money.
(3) KCee
The ‘Pullover’ crooner has made big bucks both within the music industry and with his own business as well. KCee’s car collection is close to running into N100 million with a Bentley GT at about N30 million, a Range Rover Sport and a Mercedes G-Wagon too.
(4) Wizkid
The Starboy has long been known to be collector of the latest and flashiest cars. But perhaps the most super of the rides is the Bentley Continental which is about N45 million. Other cars in his collection include a BMW X6 and a Porche Panamera.
(5) M.I Abaga
The Chocolate City boss is also well known for his taste in the expensive cars. From a Bentley of about N36 million, and two Mercedes, including a G-Wagon, his car line up is quite impressive.