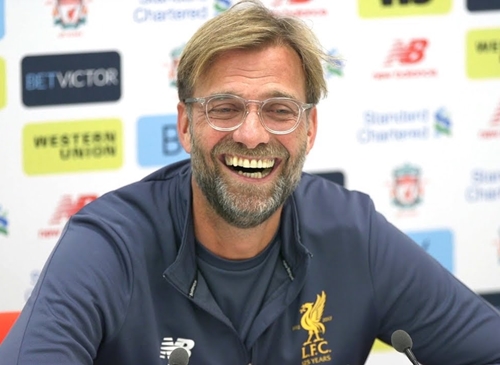 Jurgen Klopp
Although they conceded two late goals, Liverpool’s manager, Jurgen Klopp was delighted with his team’s performance in the 5-2 win, and acknowledged that Liverpool rarely do it the easy way after a late rally at Anfield kept Roma alive in their Champions League semi-final.
Mohamed Salah and Roberto Firmino both scored twice, while Sadio Mane was also on target, as Liverpool raced into a 5-0 lead after 68 minutes of the first leg.
Yet Roma who rallied from a 4-1 first-leg defeat to knock Barcelona out on away goals in the previous round of the competition, gave themselves a lifeline with two goals of their own before the final whistle.
Eden Dzeko scored before Diego Perotti made it 5-2 from the spot after James Milner was penalised for handball, though Klopp felt the decision was harsh.
Still, with a healthy lead to take into the return fixture at the Stadio Olimpico, Liverpool’s manager praised his players for a "fantastic result" on home soil.
"It was pretty much a perfect performance for 80 minutes or so," Klopp told BT Sport.
"We made one mistake defensively where Dzeko could use the situation. That can happen, we knew before the game they have quality and we could not avoid that all through the game.
"I think we agree the penalty is not a penalty. It’s not even handball, let alone a yellow card. But that’s the situation and it’s 5-2. I’d be much happier, of course, if we had won 5-0 or 5-1, but 5-2 is a fantastic result.
"I could not have imagined that was possible [before kick-off], so the boys did outstandingly well and we will go there and try to win again."
Liverpool started the game in subdued fashion before ripping Roma apart either side of the half-time interval.
Salah was the catalyst for the chaos, tormenting his former club with a brace before the break. The Egyptian forward turned provider in the second half, supplying two assists before being substituted.
While conceding twice in the closing stages took the shine off the performance, Klopp insisted he would focus only on the positives once the dust had settled.
"You always have to learn from the game. I really thought how we played them, with all these runs in behind, was brilliant," he said.
"It changed the game completely – they could not cope with that. We scored these goals, but we could have scored more. It sounds crazy in a semi-final, but we could have scored more. We missed a lot of chances.
"That’s all positive. At the moment it doesn’t feel that positive because they scored two goals. But, believe me, I will see the good parts of the game.
"We are Liverpool – that obviously means it’s all-inclusive football. Everything is involved. We obviously have to do it the hard way, but we’ve no problem with that."
--Advertisements--