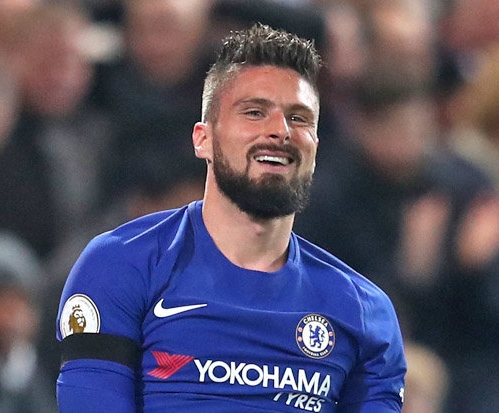 Chelsea striker, Olivier Giroud has warned Barcelona he feels certain he will score against them on Wednesday night, Dailystar reports.
--Advertisements--

The French man who has just one Blues goal to his name since making the £18m switch from Arsenal in January, was unlucky not to add to his tally against Crystal Palace on Saturday however.

He was a handful for the Eagles backline, setting up Willian for the opener and later striking the post.

Antonio Conte’s side travel to the Nou Camp having secured a 1-1 draw in the first leg, and with the tie in the balance, Giroud’s confidence in his own ability is unwavering.

He said: “As a striker, sometimes you don’t look at the goal. You shoot and it’s going in but you need a bit of luck.

“It’s important keep the confidence high and work for your team-mates so I tried to deliver some passes for Willian and Eden. I’m happy because we won and even if I didn’t score I’m sure I will in the next games.”

Palace grabbed a late consolation, but the win mean Chelsea are now within four points of Liverpool in fourth place.

Giroud explained how he just missed out on his first Premier League goal for the Stamford Bridge outfit.

He said; “Sometimes the goal looks smaller in certain games and that was the fact for me. I kept going, kept believing I could score but I was a bit unlucky.

“The defender saved the ball off the line (pictured below), and after that I hit the post. After that I just tried to play with my team-mates and the most important thing was that I felt good on the pitch.”